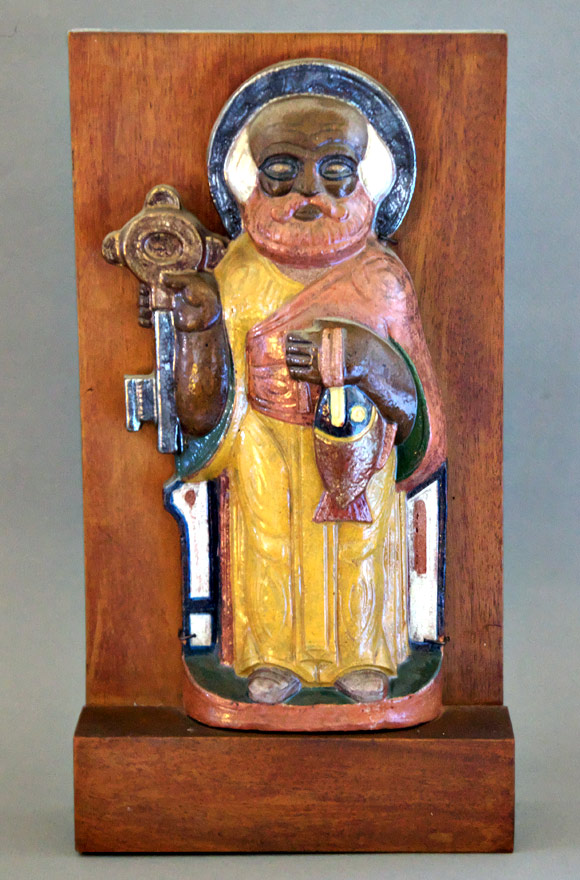 Valentin Shabaeff, an artist born and educated in Russia, maintains his studio in Montreal. Once a painter and a Sculptor, he now works in ceramics, producing reliefs, murals, and sculptures. Shabaeff deplores the amateurism he finds among canadians working in Ceramics, insisting that progress only comes when one makes ceramics one’s profession, and is prepared to undergo a rigorous apprenticeship.

Born of a peasant family living on the Volga Plateau of Russia. As a child he loved drawing at the village school. He began formal training at the age of 12. He studied painting, design, sculpture and ceramics for 9 years at the Moscow Art Academy, and Byzantine murals at Kazan, also at the Imperial Academy of Art at St Petersburg (Petrograd, 1914; later named Leningrad). His teachers were Prince Paul Troubetzkoi, Baron Klodt (for ceramics) and Prof. Feishin. He joined the Russian army during WWI, was wounded, taken prisoner, and spent several years along with 75,000 other Russians in a camp where more than a hundred prisoners starved to death daily. He returned to Russia on a prisoner exchange in 1918 and taught art and was employed in the assessment of works of art for the Customs Department in Moscow. In 1925 he left Russia due to the decline of activity in fine arts following the revolution. He travelled to China where he did bronze and stone sculptures for His Majesty’s Hotel and Chinese Customs House at Shanghai (1925-1928); moved on to Indochina and then to Japan. He arrived in United States in 1928 and worked in Hollywood on a design for Cecil B. de Mille’s movie King of Kings. He came to Canada in 1930 and settled in Montreal where he completed commissions for the Chapel of Christ Church Cathedral (ceramic triptych of Madonna and Child with Seraphim); ten stone reliefs for the CNR Central Station; murals for Henry Birks and Sons in Quebec City; murals for Samovar Montreal night club and other commissions. In 1945 Dr. Max Stern of the Dominion Gallery was the first Montreal art dealer to give Shabaeff a solo show of ceramic plaques, reliefs and jewellery. The entire exhibition was sold out to collectors. The brooches included heads of women and horses, birds, fish (all with simplicity of line and subtle colour). In his first visit to Toronto in 1939 he met Grace Dempster. She wanted to be an artist but had trained as a teacher to please her family. He hired her as an apprentice and they were later married. Ten years after that first visit to Toronto he held his first solo show at The Fine Art Galleries of Eaton’s College Street Store. Viewing his work Rose MacDonald of the Toronto Evening Telegram noted, “Shabaeff’s ceramics come as a magnificent surprise. They glow with color, color of fine glazes, a vibrant turquoise most often, enriched by applications of gold and of platinum which take on new values of lustre as the result of the three successive careful firings . . . Shabaeff’s art is in the great apostolic succession of Byzantine art a tradition of which the Russian Greek Orthodox Church was the direct inheritor.” In his second show at Eaton’s, Pearl McCarthy of the Globe & Mail noted one of his works as follows, “Shabaeff has turned out a breathtaking masterpiece. It is a huge wall plaque 58 inches x 46 inches, in modelled, fired clay with colored glazes and pure gold and platinum, on the subject of the Rape of Europa. It centres the exhibit of work by this man of great talent which will go on view Tuesday in the fine art galleries of Eaton’s College Street.” He did a 16-ft. ceramic Our Lady of Light for the Loretto College, Toronto. In the years that followed he lived and worked in Wellington, ON; Granby, QC; Napanee ON; Brockville, ON; Cornwall, ON; Smiths Falls, ON; Ottawa, ON; and Vancouver, BC. He completed 25 reliefs, murals and bronze sculptures for Hotel Vancouver. In 1962 he stopped making ceramics but continued with sculpture, painting (water colours, oils, pastels), drawings, and etchings. Shabaeff used the finest of materials, paints and frames for his work. The last public account of Shabaeff appeared in a 1974 article in The Montreal Star by Henry Lehrnann when Shabaeff was 83 years old. Valentin and his wife Grace had one daughter, Agnia (b. c.1950). Since no public notice of his death has been found, it is not clear when or where he died.” [MacDonald, “A Dictionary of Canadian Artists”]